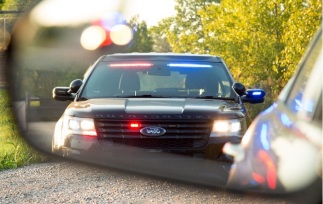 The police have a lot of power over civilians. This is especially palpable on the roads.[1] The police can pull you over for a “broken taillight,” order everyone out of the car, frisk everyone, arrest the driver for the broken taillight, impound the car, and then search every container inside.[2] Of course, where there is power, there are abuses of power, and discretion is often abused along racial lines. Police pull over more non-white drivers for minor infractions.[3] They also search non-white drivers more often and issue them more tickets.[4] Police kill Black motorists at much higher rates, and use non-lethal force against them more than twice as often.[5] At the same time, “[p]eople who are police, are related to the police, hold positions of power and authority, or who frequently work with or come in friendly contact with the police are largely immune from traffic enforcement.”[6]

So what can we do about it? One solution would be to simply stop enforcing traffic laws. This option seems pretty attractive, given everything above.[7] For places with smaller populations, it may even be feasible. Several European cities have experimented with the idea of eliminating traffic controls with surprising success.[8] Nonetheless, traffic safety is a serious concern; every year, there are over five million crashes, resulting in over thirty thousand deaths.[9] Studies consistently show that reduced enforcement results in more crashes.[10] Conversely, “highly visible, sustained, and widespread” enforcement has been shown to be the most effective.[11]

The most promising solution seems to be automated enforcement via red light and speed cameras.[12] Automated enforcement ensures even-handed application of swift and certain consequences for dangerous driving behaviors.[13] They remove the risk of racialized, selective enforcement and eliminate the danger, both to police and motorists, that a traffic stop could turn fatal. There are some indications that the benefits decline over time as people grow accustomed to stationary cameras,[14] but studies suggest that high-visibility enforcement mechanisms continue to be effective.[15]

Not everyone is affected equally even by even-handed distribution of traffic fines.[16] Red light and speed cameras can issue hundreds of tickets per day, so failure to account for the disparate impact of fines on vulnerable populations can lead to gross injustice.[17] This could be avoided by a more progressive fine system like Finland’s[18] or restorative justice practices for those unable to pay.[19] To maintain public support for them generally, fines should be low, funds should go directly towards highway safety, and the public should be informed well in advance about the reasons for the cameras and the consequences for violations.[20] As long as programs focus on being transparent, fair, and responsive to changing needs, automatic enforcement can go a long way towards reducing inequalities on the road.

[1] https://www.bjs.gov/index.cfm?tid=702&ty=tp (“The most common reason for contact with the police is being a driver in a traffic stop”).

[2] See David H. Bayley, Law Enforcement and the Rule of Law: Is There a Tradeoff?, 2 Criminology & Public Policy 133-135 (2002) (describing an officer who admitted to regularly pulling people over under the pretense that their taillights were broken); Maryland v. Wilson, 519 U.S. 408, 415 (1997) (holding “an officer making a traffic stop may order passengers to get out of the car pending completion of the stop”); Arizona v. Johnson, 555 U.S. 323, 327 (2009) (holding that, to frisk a passenger, “police need not have . . . cause to believe any occupant of the vehicle is involved in criminal activity”); Atwater v. City of Lago Vista, 532 U.S. 318, 354 (2001) (holding “[i]f an officer has probable cause to believe that an individual has committed even a very minor criminal offense in his presence, he may, without violating the Fourth Amendment, arrest the offender); Colorado v. Bertine, 479 U.S. 367 (1987) (holding inventory searches of cars impounded after the driver’s arrest are constitutional).

[4] https://www.bjs.gov/content/pub/pdf/cdsp02.pdf (noting Black and Hispanic drivers are more likely to get pulled over, searched, and ticketed).

[5] See https://www.washingtonpost.com/national/a-disproportionate-number-of-black-victims-in-fatal-traffic-stops/2015/12/24/c29717e2-a344-11e5-9c4e-be37f66848bb_story.html?utm_term=.7b4800ea8bc6 (describing a number of fatal traffic stops); https://www.bjs.gov/content/pub/pdf/punf0211.pdf (noting Black and Hispanic motorists are 2-3 times as likely to report threat or use of force by police during traffic stop).

[12] https://www.cdc.gov/motorvehiclesafety/calculator/factsheet/speed.html (estimating that speed cameras likely result in a 20-25 percent reduction in crashes); http://www.nyc.gov/html/visionzero/pages/law-enforcement/law-enforcement.html  (finding “[i]ntersections where red light cameras were installed saw a 20% decline in all injuries, a 31% decrease in pedestrian injuries, and a 25% decrease in serious injuries in the three years after installation).

[13] Provided, of course, that they are distributed fairly, according to locations empirically determined to be high-risk by crash data.

[14] https://perma.cc/65X9-NGAA (“in recent years, accidents and fatalities — both motorists and pedestrians — have crept back up in spite of the cameras”).