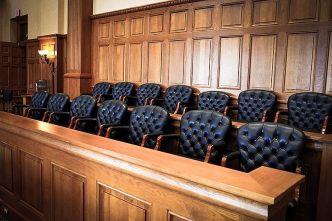 Michigan courts are insidiously tedious in the way they secure all-white juries.[1]For serious cases, more than 60 potential jurors are brought to the court, and then 14 are randomly selected to sit in the jury box.[2] From there, they are subjected, one by one, to a litany of questions about their jobs, their families, and their attitudes about crime and law enforcement.[3]

By the third juror, the questioning is monotonous almost to the point of becoming white noise. It’s little wonder, then, that when the juror of color with a slight accent is offered an opportunity to leave — by the judge, no less — they jump at the chance. One Michigan judge is so adept at detecting jurors who “may have trouble understanding trial proceedings,” that he knows as soon as they open their mouths. Despite their previous sworn statement that they understand English[4] he has them identified and excused for cause within 3 sentences.[5]

Other disparities sneak in as the questions drone on for 30-40 more jurors. The black juror isn’t asked for clarification when he says that jury duty would be a burden.[6] The white juror has to define his financial situation and swear that he wouldn’t be able to make rent.[7] The white juror with an uncle and brother-in-law in law enforcement who said that she’s inclined to believe police over civilians is deemed impartial after she’s pressed into saying she thinks she could set aside her personal feelings and view the evidence fairly. But the black juror whose cousin six states away had a bad experience with police is dismissed for cause. The end result is often an all-white jury.

Why does that matter? Well, besides the fact that the Supreme Court has held that the Sixth Amendment requires some semblance of a representational cross section of the population in jury panels,[8] all-white juries are simply not as good.[9] Juries are just as susceptible to the same unconscious biases that infect the voir dire process, but having more diverse juries helps to limit their ultimate effect.[10]

So how do we fix it? Ultimately, many large-scale systemic problems need to be addressed to make jury service more accessible to minorities. Also in need of reform is the court system’s paradoxical view that juries should somehow simultaneously be impartial and capable of presuming the defendant innocent. Courts want jurors to be exactly as likely to believe a witness saying the defendant is guilty as one saying they are innocent. At the same time, jurors must demand proof beyond a reasonable doubt, which necessarily involves heavy skepticism of State witnesses. These are changes that are not quick, easy, or likely to be cheap.

One fairly easy solution would be to eliminate or severely curtail the prosecution’s allowed peremptory challenges while allowing the defense more. This would effectively allow the defense to choose the jury, which would mean that the three to four people of color that make it to the venire and are able financially to serve would have a real chance of being on the jury. Unfortunately, the idea that prosecutors need peremptory challenges because jurors who distrust the police or believe certain behaviors shouldn’t be criminal should not be allowed to serve is deeply entrenched.[11] MCR 2.511(F)(2) also stands in opposition.[12]  In theory, it should bolster Batson[13] to prevent prosecutors from striking jurors of color. In practice, it’s used to prevent defendants from using peremptory strikes.[14] That provision needs to be rewritten before defendants can overtly strike jurors in an attempt to get a more diverse jury (or even to strike a juror for her connections to law enforcement after having challenged one of the prosecution’s strikes, it seems).[15] In the meantime, it falls largely on defense lawyers to push back against the subtle racism in voir dire.

[1] I focus here on voir dire, but the problem begins even earlier, at the summons stage. See generally https://www.americanbar.org/groups/litigation/committees/diversity-inclusion/articles/2015/lack-of-jury-diversity-national-problem-individual-consequences/.

[3] Most of these questions were already submitted to the jurors in written form. A sample questionnaire can be found at https://courts.michigan.gov/Administration/SCAO/Forms/courtforms/mc321b.pdf.

[4] Required as a response to the initial qualification questionnaire found here https://courts.michigan.gov/Administration/SCAO/Forms/courtforms/mc321a.pdf.

[5] This is based on personal observations of the author. Jurors wouldn’t even finish a sentence before the judge would interrupt with, “do I detect a bit of an accent there?” and offer to excuse them. This happened at least six times in one voir dire. Each time, the defense stipulated to the excusal.

[6] The situations described in this paragraph are all based on personal observations.

[7] Given that jurors are compensated as little as $15 per day if court doesn’t run for the whole day, and only $45 per day if it does, anyone who relies on overtime or lives paycheck-to-paycheck is likely to face such hardship. https://courts.michigan.gov/Administration/SCAO/Resources/Documents/other/2018JuryRateIncreases.pdf. Financial constraints also affect who responds to the jury summons in the first place. See generally https://www.americanbar.org/groups/litigation/committees/diversity-inclusion/articles/2015/lack-of-jury-diversity-national-problem-individual-consequences/.

[12] “Discrimination during voir dire on the basis of race, color, religion, national origin, or sex for the purpose of achieving what the court believes to be a balanced, proportionate, or representative jury in terms of these characteristics shall not constitute an excuse or justification for a violation of this subsection.”

[13] In Batson v. Kentucky, 476 U.S. 79 (1986) the Supreme Court held that prosecutors could not use peremptory challenges to strike jurors because of their race.

[14] See, e.g., People v. Kabongo, No. 338733, 2018 Mich. App. LEXIS 3773, at *12-13 (Ct. App. Dec. 27, 2018) In Kabongo, the defense made an unsuccessful Batson challenge. Later on, the defense was prevented from using a peremptory challenge on a white juror, despite giving nearly identical reasons as the ones considered sufficient for the prosecution’s challenged strikes.